Jewelry Culture and Symbolism around the World

By British Assignments Help on Tuesday, March 3rd, 2020 No Comments 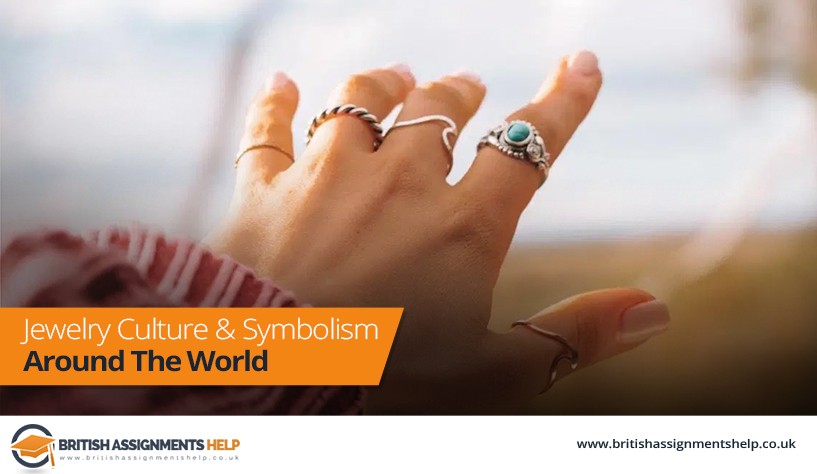 Men and women all around the world like to wear different styles of jewelry. Some prefer to adorn it on special occasions while other items are passed down from generations, holding sentimental value. Girls, especially, like to wear them to match their outfits and complete the look and some people wear rings and necklaces as they hold a deeper meaning or spiritual significance. Whatever may be the reason, it can’t be denied that there are several different styles of jewelry items in the world, and they hold a unique purpose and symbol. They are used for self-expression, for trivial beliefs, and even for fashion.
Hence, below the significance of different types of jewelry is mentioned in detail. If you’re conducting a study in cultural psychology or anthropology, then this discussion will facilitate exceptional assignment help online to you.

Famously known as the stone of heaven, Jade jewelry holds a prominent significance in Chinese culture. If you’re aware of the Yin and Yang theory, then you’d know that this stone plays a pivotal part in maintaining that balance. Now how could a stone bring balance and mediation in life, you’d ask?
Well, stones have a way of bringing changes in the lives of the people wearing it. Some tend to bring positive changes, while others can be cost bearing and repulsive. Jade induces a sense of balance as it establishes itself as a perfect mediator between hardness and beauty. Interestingly, this stone is more expensive compared to gold and silver due to its cultural relevance.
Chinese adorn babies with jaded bangles to protect them from bad luck. Some people even believe that this stone has the power to fight off evil spirits. Basically, the stone is relevant for the healing, good luck, creativity, and metaphysical properties.

Turquoise has a strong value in modern times. In the ancient era, it was considered to possess spiritual powers. However, now it is mainly adorned to bring wealth and success to self.
What is interesting to find out is that every culture has a different notion attached to this stone. For example, the Navajo tribe strongly believes that this stone carries health, happiness, peace of mind, and a connection to the naturalistic environment. Apart from this, this tribe asserts that this stone resonates high social standing and power in society. Persians have always attached the idea of heaven with this stone whereas Greeks symbolism it as a purity stone. A fascinating fact about this stone is that it changes its color from blue to green.
Hence, it can be acknowledged that most Tibetan cultures think of this transitional change as a coming of age or wisdom. In modern times, this stone has intense and deep meaning. People wear it for emotional healing as they feel that it opens up your heart and gives clarity.

Beaded jewelry is commonly worn today, but it has separate connotations attached to it. For example, in most African cultures, the beads symbolism association with a certain cult or tribe. They’re also adorned by traders, and for some, it has a religious significance. In the Masai culture, the usage of beads is intriguing.

For example, women who wear a bright blue beaded necklace to show that they are married. Furthermore, the more elaborate and detailed the necklace becomes, the higher their social standing seems. In Greece, a string of colorful beads forms a band known as Colombo, which is a powerful stress reliever.

Hence, these people often wear it while meditating or exercising. In ancient Egypt, a practice was observed where priests, dancers, and other wealthy individuals would wear collars and necklaces. However, it was interesting to notice that these collars and necklaces were used as rewards. Hence, they represented skill and valor.

Thus, it can be concluded that jewelry has a significant role to play in cultures. They symbolism and represent much deeper meanings than what is obvious to a naked eye. Due to this reason, it is said that to find out more about one’s culture, you should learn about its artifacts and other culturally relevant items. From food to jewelry, every culture has layers that accentuate their beliefs and values.