Veganism - Is It A Healthy Choice? -

Veganism – Is It A Healthy Choice?

By British Assignments Help on Monday, October 14th, 2019 No Comments 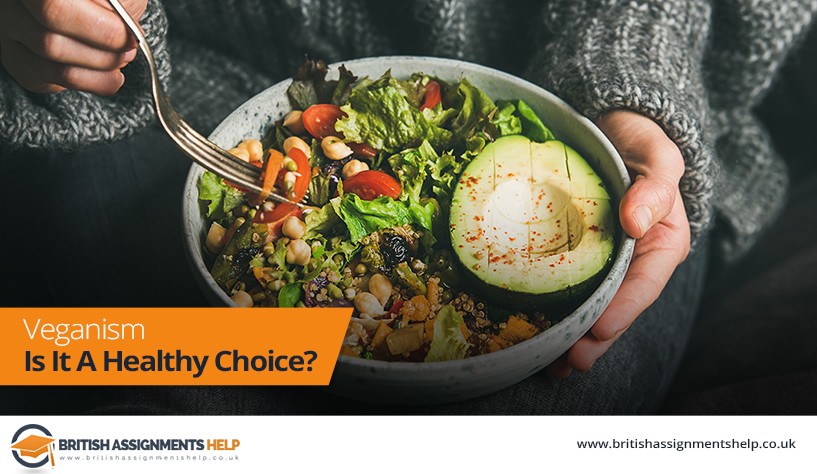 Veganism is a lifestyle in which the participants refrain from consuming food which potentially causes harm to an animal. Unlike vegetarians, vegans abstain from using any animal by-product including milk, cheese, fur, fish and honey.

Vegans are considered to be part of an animal rights group, who fight against the cruel treatment of animals.

Being a vegan has gained popularity in the past couple of years. This lifestyle has been adopted by many individuals, from all around the globe. Due to their dietary restrictions, vegans usually stick to a plant-based diet. As a result, most people consider veganism to be a healthy lifestyle.

Contrary to the belief above, veganism is not entirely a healthy choice. While it provides certain benefits to the body, an exclusively plant-based diet can rob the body of the much-needed elements. The following discusses all the benefits and the drawbacks of a vegan diet:

It can facilitate weight loss

A plant-based diet is a great contributor to one’s weight-loss journey. Indulging in a diet comprising only of non-processed, healthy plant-based food can assist individuals in shedding off the extra weight. This diet is especially recommended for individuals dealing with obesity. Multiple pieces of research have been carried out which support these findings.

It can prevent heart diseases

Indulging in a plant-based diet can decrease the risk of developing heart disease. A study comprising of a sample of 200,000 individuals revealed that the group which followed a plant-based vegan diet had low risks of developing cardiac-related diseases in contrast to the control group.

Reduce the risk of developing different types of cancers

Multiple studies have been carried out to observe the correlation of cancer occurrence and the indulgence in a plant-based vegan diet. Studies have revealed that the risk of some cancers is declined for individuals who follow the vegan diet. The study found that:

It can manage and prevent the development of diabetes

A plant-based vegan diet can assist in improving blood sugar control. As a result, a connection has been found between low risk of diabetes and individuals who participate in this diet.

Costs of a vegan diet

A vegan diet has certain costs that result in an unhealthy state of the body. As a vegan diet does not use meat or any by-product of animals, certain nutrients are restrained from entering the body. The following nutrient deficiencies are found in a plant-based vegan diet

Meat is the main source of allowing an intake of iron in the body. Vegans who substitute meat with non-heme iron (obtained from plants) are still prone to the risk of developing an iron deficiency. This happens because the iron found in plants is not only in a short percentage, but this form of iron is also difficult to absorb.

The vitamin B 12 is normally found in animal by-products such as egg and dairy, fish and meat. The lack of these ingredients in the body can result in the symptoms of the following diseases:

Vitamin D and calcium are often found in the same food groups. These components work together to promote bone health in individuals. The deficiency of these elements in the body can affect the individual’s gait, and further refrain them from performing the activities of daily living.

Omega-3 fatty acids are usually found in fish and eggs. These nutrients play a significant role in maintaining the health of the heart, brain, eyes as well as in reducing chronic inflammation.

A vegan diet may cause weight gain

Indulging in a plant-based diet is extremely difficult and costly. Individuals who consume a diet of organic fruits and vegetables require a lot of time to cook and prepare the meals. Additionally, organic food is sold exclusively at certain stores at a high price. Most students sacrifice hiring an essay writing service to afford this food.

As a result of this, most vegans resort to eating junk food which ultimately leads to weight gain. As this food can be easily found on the racks of supermarkets, vegans find it easier- and tasteful, to treat themselves with these food items.

The vegan diet comprises of a high percentage of phytoestrogen content

Vegans usually substitute dairy products with the use of soy. Instead of using cheese, milk or bacon, they resort to using soy cheese, soy milk, and soy bacon. The problem with this is that when a high share of soy enters the body, the endocrine system experiences an imbalance.

Soy comprises highly of phytoestrogen, which can play the role of estrogen in the body. Hence, when an excessive amount of estrogen is produced in the body, the entire endocrine system changes its production (as all hormones are dependent on one another).

Indulging in a plant-based diet has certain benefits but many severe costs. While it is not recommended for individuals to consume a vegan diet entirely, the frequency of eating meat and other animal by-products should also be reduced. After all, maintaining a perfect balance between these two approaches can be beneficial for the body.