Why Do Workers With More Education And Training Get Paid More?

Why Do Workers With More Education And Training Get Paid More?

By British Assignments Help on Friday, March 29th, 2019 No Comments 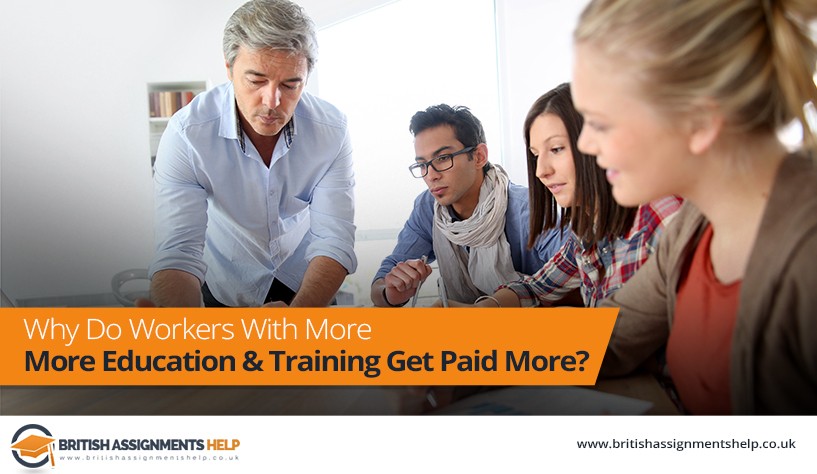 In recent times, debates on income disparity and unequal distribution of income have gain quite the momentum among several activists and social welfare groups. There has been a general air of discontent among the marginalised groups that refuse to let the income disparities from becoming a norm.

Everywhere one looks, whether, in the eastern or western countries, changes in economic structures and an increase in inflation rates has caused societies to become deeply penetrated with resentment. Many people tend to argue that those who have received proper formal education continue to prosper even in such a despondent state of the economy while those with none or low level of education are left to bear the brunt of an economy that is continually going down the drain.

While it is certainly unfair to those, who do not have the fortunate privilege of having received formal education, in the same vein, the benefit and resourcefulness of the educated and well-trained populace of a country cannot and should not be underestimated.

There are various reasons why this tends to be the case. While their formal training means that they don’t have to do odd and extremely laborious jobs, their contribution to an economy is of a different kind.

Pupils who graduate from studies of economics, business, law among many others, go on to take up jobs in the services sector of a country, such as in banking, teaching, nursing, tourism etc. According to business writing experts at do my assignment, the service sector plays an extremely pivotal role in the betterment of an economy.

Firstly, a major chunk of the Gross Domestic Product (GDP) is contributed towards by this tertiary service sector, which in turn helps to create more jobs, inputs and public services for the economy. As a ripple effect, in the long run, the continued contribution of the educated and trained professionals employed in this sector helps to remedy and bring the economy out of multiple crises such as recession, unemployment, lowering of GDP etc.

On a micro level also the contribution of trained individuals tends to be far superior compared to those who lack formal training. Years of education tend to prepare individuals for undertaking skilled and professional work. Unlike laborious or manual work, such professions tend to demand critical evaluation in many facets of work, which only the trained workers can keep up with.

Additionally, education, especially at higher levels, teaches individuals some extremely valuable managerial skills of leadership, time management, resource allocation, research etc. All of this allows them to run organisations in a much more systematic and successful manner, which again contributes towards an economy in the form of taxes and all, helping the economy to recover and come out from a downward spiral.

For all their various contributions, the general trend of economy and business sector has been to compensate them more in monetary terms than those who lack such skills and education. However, groups and associations protecting the rights of the untrained labour force of an economy have been able to secure a slightly higher wage rate, which has come forth as a beacon of hope for many individuals.